Canada is investing in infrastructure changes across the nation– will it have an impact on our lives?

Canada will spend over $180 billion on infrastructure over the next 12 years¹. Are these investments the ‘healthy choice,’ and will they improve the health and well-being of Canadians?

The design of our cities has a lasting impact on how we move and participate in everyday life, influencing our chances of experiencing poor health outcomes like heart disease, diabetes, and cancer. The human-made elements of our cities, or the ‘built environment,’ where we live, work, learn, and play have vast potential to increase the well-being of our nation. This could include urban design, land use, and transportation systems that encompass patterns of human activity within the physical environment. Substantial evidence supports a link between positive health outcomes, such as increased physical activity, and features of the built environment (parks and natural environments, residential density, walkability, and traffic speed or volume)².

But much of the previous evidence on health and the built environment comes from cross-sectional studies³,⁴ , which are observational and look at a population during one point in time. This limits the ability to draw causal conclusions on how a city’s changes can impact health.

If the design of a neighbourhood supports active modes of travel such as walking or bicycling, more people will feel encouraged to be outside and move about their city⁵. In our previous research with older adults⁶, we’ve seen that people get similar physical activity on a bus trip as on a walking trip — walking to and from the bus counts!

People often choose to live in neighbourhoods that suit their interests, and this creates challenges for researchers as they study how neighbourhood design is influencing behaviours. For example, individuals who enjoy walking for transportation might choose to live in neighbourhoods that are conducive to walking. We need better evidence from longitudinal studies, studies that examine behaviours and fluctuations over time, to indicate what changes to neighbourhood features might create positive impacts on mobility. Interventions may be helpful for some, but harmful for others.

However, physical activity is not the only health outcome that is influenced by our city’s design. The built environment has also been associated with people’s social participation⁷ and well-being⁸. With this evidence in mind, it’s imperative that we critically examine how cities are changing, and how they can shape our health.

That’s where we come in. The Active Aging Research Team is part of a national research collaboration of scientists, urban planners, and engaged citizens, who go by the name of INTERACT: the INTErventions, Research, and Action in Cities Team⁹. As Canadian governments are making big investments in infrastructure, we think it is critically important to understand how these changes shape our lives. INTERACT’s aim is to uncover who stands to benefit from changes in city design, and how these changes will impact the health and well-being of Canadians from coast to coast. INTERACT will conduct natural experiment studies of urban form changes in four Canadian cities, with four aims….

To characterize the context for changes in urban form, for the well-being of all ages and abilities.

The context of an urban form intervention includes both the perspectives and opinions of the entire population, along with the physical infrastructure changes that are occurring. INTERACT is conducting natural experiment studies of urban form changes in four Canadian cities. To understand context, they will explore and describe diverse stakeholders’ perspectives on the factors that influence the success or failure of these interventions. Additionally, INTERACT will gather data from each city that documents the physical developments of the intervention.

1. Vancouver, BC: The Arbutus Greenway

2. Victoria, BC: The All Ages and Abilities Cycling Network

To refine the measurement of changes in the urban form and outcomes using innovative tools.

INTERACT sees the city as a living laboratory. We use innovative tools that harness the power of mobile technology, such as cell phones and GPS monitors, and interactive mapping to measure the impact of changes in urban infrastructure on people’s physical activity, social participation, and well-being, and inequalities in these outcomes, such as the spatial distribution of individuals to the intervention, along with population vulnerability. By enabling cities to understand the health impact of their investments, INTERACT’s research aims to inspire healthy and sustainable urban development that will leave a lasting impact on population health and health equity in Canada.

INTERACT is recruiting a cohort of between 300 and 3000 adult participants in each city, who are 18 years of age or older. We will collect data at three time points to measure changes in health outcomes to coincide with changes to each city’s infrastructure.

To determine the impact of changes in urban form on physical activity, social participation, and well-being.

We are hoping to deliver timely evidence about how changes to cities influence health and to develop methods and tools to facilitate studies going forward. This research is supported by the social-ecological model, which considers the impacts of and relationships between individuals, communities (schools, workplaces, neighbourhoods), and societies (the broad societal factor; norms and policies)¹⁰. 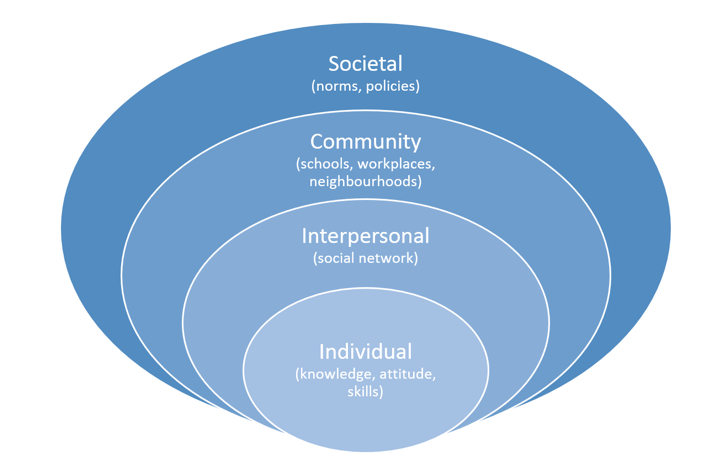 To guide decision making on healthy urban planning, with the hopes to help create healthier and happier cities for all.

We will share our findings with many important knowledge users, such as relevant municipalities, regional governments, health authorities, non-governmental organizations, academics, and citizens, to directly influence positive changes. To do this efficiently, we use a process of rapid reviews that can inform research or policy at the local level. We also aim to enhance training and capacity for urban form research through open and wide dissemination of evidence, tools, and methods to both practitioner and research communities⁹.

By working together across communities and sectors, we hope to help make Canada a healthier place for everyone to enjoy.

For more details on how INTERACT is evaluating changes to Canadian cities, you can find the newly published protocol paper here: https://doi.org/10.1186/s12889-018-6339-z

10. Centers for Disease Control and Prevention. The Social-Ecological Model: A Framework for Prevention. 2015. http://www.cdc.gov/violenceprevention/overview/social-ecologicalmodel.html.